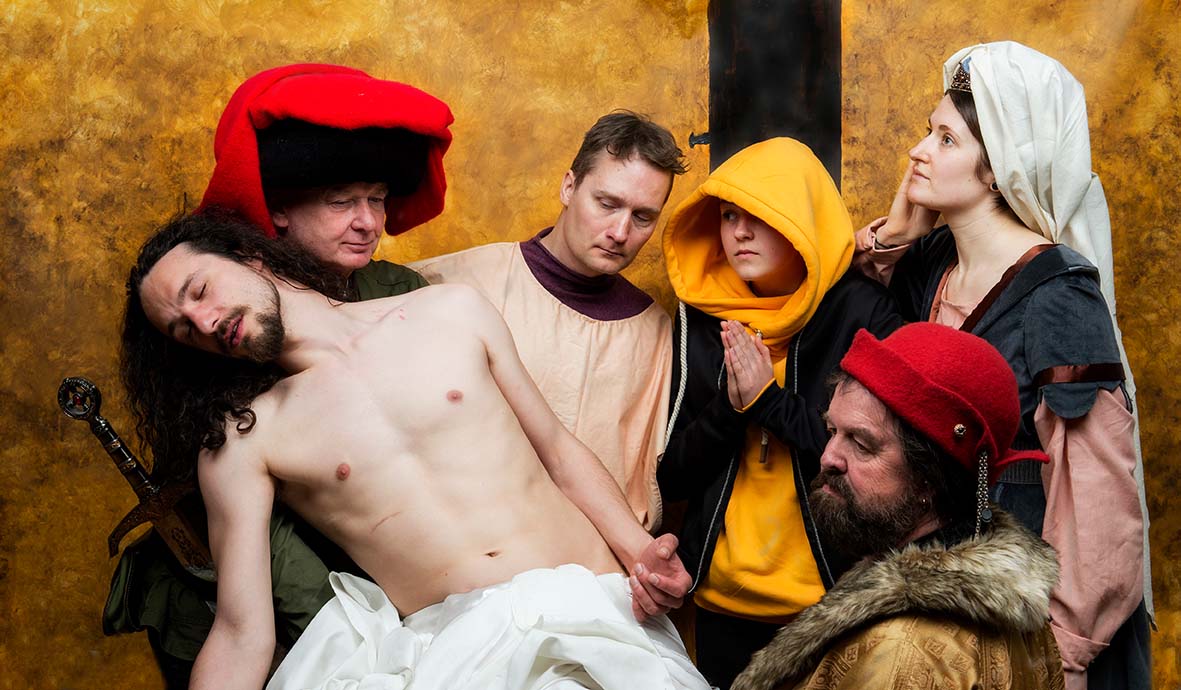 The Historic and Mythical Imagery group recreated two beautiful Old Masters held by the Hatton Gallery in Newcastle and photograph the results. The two painting chosen were the ‘Drunken Noah’ and the ‘Lamentation’ displayed below.

This was something a little new to our group as it was an event where the public were able to assist our performers to strike the right pose and at the end of the photo shoot step in to be part of the performance.

Leading up to the event, two member of our group, Jo and Pat ran workshops where the public came to the Hatton Gallery to assist in making the costumes. Their input really helped in bringing our images to life.

On the day, my friend and Historian, Anthony Atkinson began the event by presenting the history of the paintings to the public; this involved referring to the performers in costume and in the case of the drunken Noah ridiculing his sons for their lack of respect for their drunken father. Everyone involved played a part and I must mention Phyllis who painted the backgrounds used in both shoots, also pictured below.

In terms of lighting, the last two images below show my crude sketches which help me to work out how to position lighting to try to replicate the artist’s creative use of light and also to create backgrounds to add realism to each image. At the end of the shoot members of the public stepped in to replace our performers. The whole experience was new and exciting. Following this success we will be doing more of the same so look for new blog posts. This so far, has been our most rewarding and satisfying shoot. Below our Artist Phylis creating the two backgrounds. Thank you to Newcastle College fro allowing us to use their space.

Keep watching because we are only just getting started!

The Lamentation – Our interpretation

The Lamentation of Christ – “Lamentation” meaning a passionate expression of grief or sorrow – was a popular subject in North European painting, inviting worshippers to contemplate the pain and suffering of Christ (meaning “the anointed one”). This 16C (c1560) painting is a copy of a design by Hugo van der Goes a prominent artist from the Netherlands. Only a fragment of the original remains at Christ Church, Oxford. A relatively affluent looking group are tending to a rather serene Jesus, with sanitised depiction of wounds.

The Drunken Noah – Our Interpretation

After disembarking from the Ark, Noah planted vines, made wine, drank the wine and intoxicated, uncovered himself inside his tent. He was discovered drunk and naked by his youngest son, Ham, ancestor of the Canaanites. Rather than covering his father’s shame, Ham invites his brothers to mock their father. The other brothers, Shem & Japheth, however, act properly, masking Noah’s nudity with cloth; they do so whilst keeping their faces turned away. Procaccini depicts the scene in glorious, jewel-like colour. Noah Lies sprawled on the floor, grapes and a jug of wine indicates the source of his deep slumber. Ham points derisively at his father.

Radio Interview with Coast Radio presented by Ian Conway. Joj Pat and I met Ian to discuss everything about our group and also talk about the Hatton Gallery project.